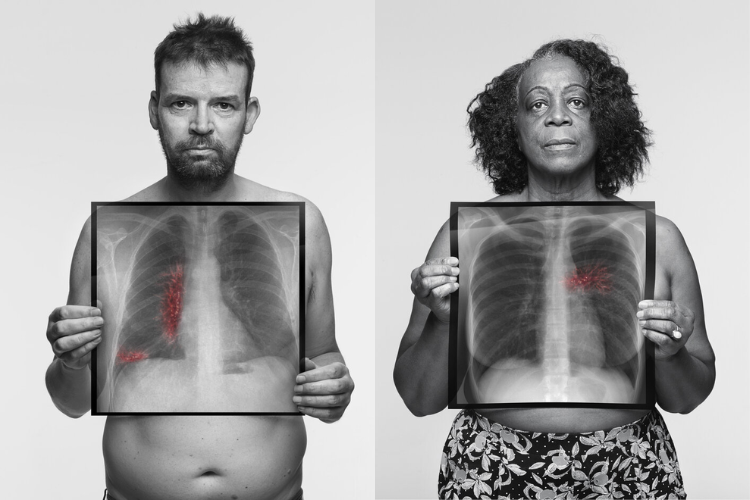 Lung cancer charities EGFR Positive UK, ALK Positive UK and the Ruth Strauss Foundation have developed the joint campaign that features photographs by renowned British photographer Rankin who lost his mother Anne to lung cancer in 2005. The charities are urging GPs and other primary healthcare professionals to act on lung cancer symptoms regardless of a person’s smoking history or age.

Over 57% of lung cancer patients in the UK are diagnosed at stage 3 or 4, too late for curative treatment; and data from patient organisations suggests that in the never-smoking population this rises to nearly 90%.[2]

Ruth Strauss, wife of Sir Andrew Strauss, was one of these patients. Ruth was diagnosed with stage IV lung cancer in early 2018, and died in December 2018, leaving behind her two young boys, then aged 10 and 13. She was 46 years old and had never smoked. In her memory Sir Andrew Strauss set up the Ruth Strauss Foundation.

ALK Positive UK, EGFR Positive UK and the Ruth Strauss Foundation jointly added: “We are delighted to come together to raise the profile of never-smoking lung cancer among primary healthcare professionals. Covid has had a devastating impact on lung cancer diagnosis, and it is crucial that awareness around lung cancer symptoms and diagnosis is enhanced. People need to be aware that lung cancer can affect anyone. All lung cancer patients deserve the opportunity for curative treatment. Early diagnosis saves lives.”

The See Through the Symptoms campaign, targeting GPs and other primary healthcare professionals, features nine patients: eight never-smokers and an occasional smoker – all diagnosed with stage 4 lung cancer. For all of them, diagnosis took many months.

With declining rates of smoking, the relative proportion of lung cancer in never-smokers is increasing. However, most people who have never smoked do not think they are at risk of the disease as lung cancer has been traditionally thought of as a ‘smoker’s disease’ by both the public and healthcare professionals.

Lung cancer in never-smokers can be challenging to diagnose but the incidence of lung cancer in people who have never smoked is increasing and fact that so many are diagnosed with late-stage disease suggest that it is under recognised by GPs.

Symptoms of lung cancer include persistent cough, breathlessness, recurrent chest infections, hoarseness, back and shoulder pain and swelling in the face or neck. The campaign is consistent with NICE guidelines on diagnosis and has been developed in collaboration with leading experts in the field.

“It’s so important as primary care clinicians that we still consider the possibility of a diagnosis of lung cancer in patients even when they have never smoked.”

“It remains crucial to remain vigilant to the possibility of lung cancer in non and never-smokers, particularly adenocarcinoma which can occur due to genetic mutations. Early diagnosis with imaging such as CXR and low dose CT is pivotal to good outcomes and cure.”

How can you get involved?

You can run your own local campaign by using the images, material, and resources available via the Ruth Strauss Foundation Lung Cancer Awareness Month webpage. Circulate the PCRS webinar: Lung Cancer in Never-Smokers during lung cancer awareness month to your primary care colleagues.

The campaign has the support of the British Thoracic Oncology Group, the British Lung Foundation, the Taskforce for Lung Health, Macmillan Cancer Support, GatewayC and the Primary Care Respiratory Society as well as leading respiratory physicians and oncologists.

The See Through the Symptoms campaign will run across multi-media platforms targeting GPs and other primary healthcare professionals. The creative work was done by leading media agency, the Engine Group, and post-production by Smoke and Mirrors, with media planning and buying by Wavemaker. Everyone involved in the campaign worked pro bono.

For more details on the campaign, please visit: www.lungcancerseethroughthesymptoms.uk